As we have already pointed out, the Paris agreement on climate change is a bad agreement. It is what in German is called a fauler Kompromiss, a reduction to the lowest common denominator. Paris pre-progammes further global warming by mandating mitigation and adaptation rather than avoidance and reduction.

Here are the some of the vital scientific and historical facts which are so often missing from “expert” and media discussions on climate change, including at the G20 in Hamburg on 7-8 July 2017.

CO2 molecules amounting to just 300 or 400 out of 1 million normal air molecules – 300 or 400 parts per million (ppm) in scientific language –  are sufficient to cause global warming through the greenhouse effect.

This is basic school physics which has been broadly understood since the nineteenth century.

Solar radiation entering the earth’s atmosphere reaches the ground and is reflected back into space as infrared radiation. 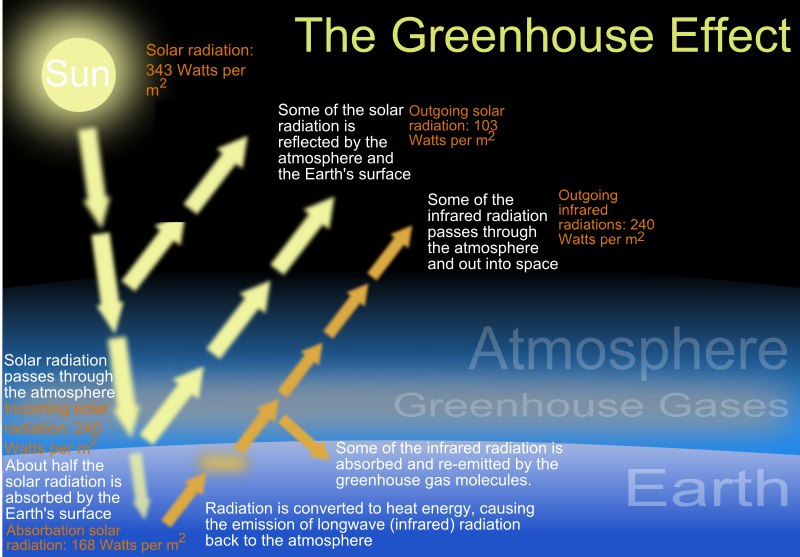 CO2 and other greenhouse gas molecules, however, prevent some of this infrared radiation from escaping, trapping the heat in the earth’s atmosphere and leading to global warming.

The problem with CO2 is that it takes a long time to decompose into its constituent parts:

For example, carbon dioxide (CO2) is exchanged between the atmosphere, the ocean and the land through processes such as atmosphere-ocean gas transfer and chemical (e.g., weathering) and biological (e.g., photosynthesis) processes.

While more than half of the CO2 emitted is currently removed from the atmosphere within a century, some fraction (about 20%) of emitted CO2 remains in the atmosphere for many millennia.

Because of slow removal processes, atmospheric CO2 will continue to increase in the long term even if its emission is substantially reduced from present levels…

The behaviour of CO2 is completely different from the trace gases with well-defined lifetimes.

In fact, only in the case of essentially complete elimination of emissions can the atmospheric concentration of CO2 ultimately be stabilised at a constant level. All other cases of moderate CO2 emission reductions show increasing concentrations because of the characteristic exchange processes associated with the cycling of carbon in the climate system.

More specifically, the rate of emission of CO2 currently greatly exceeds its rate of removal, and the slow and incomplete removal implies that small to moderate reductions in its emissions would not result in stabilisation of CO2 concentrations, but rather would only reduce the rate of its growth in coming decades.

Complete elimination of CO2 emissions is estimated to lead to a slow decrease in atmospheric CO2 of about 40 ppm over the 21st century.

Since 2007, of course, CO2 emissions have not been “substantially reduced from present levels,” but substantially increased from 280 ppm, the level it had for 10,000 years up to the mid-18th century, to over 400 ppm as of early 2017 – the highest concentration in the last 800,000 years and possibly in the last 20 million years.

Accusations are constantly made that the West caused global warming when it began burning coal during the Industrial Revolution in the eighteenth century.

But as the graph shows, global fossil carbon emissions only began shooting up from around 1950, so the problem is relatively new, even though the physics has been long understood.

Since some 20% of CO2 remains in the atmosphere for millennia, the concentration level will remain high for generations unless science, technology, government, business and finance find a commercial viable or government-subsidised way of capturing and storing the CO2 at an industrial scale.

The crucial point here is that even if all CO2 emissions ceased immediately, global warming is now pre-programmed.

The current consensus among climate change advocates is that due to historical and economic equity, reductions by the rich countries are needed so that poor countries can develop – and continue pumping CO2 into the atmosphere.

This, of course, completely misses the point that additional CO2 pumped into the atmosphere is to some extent cumulative and adds to the existing concentration due to the decades, centuries and even millennia it takes for CO2 to break down completely – thus exacerbating yet further global warming.

In a sign of our times and the general scepticism towards “experts,” the failure of temperature to keep rising in line with CO2 levels was seized upon by global warming sceptics.

In my experience, however, when challenged to explain why the science is wrong, sceptics are unable to do so and invariably switch tack using a variety of red herrings, such as arguing, rightly, that the earth’s climate has always changed, and that the science is wrong – which may have been true, although the far more likely explanation is that we lacked full information.

Sure enough, new studies in 2015 concluded that the global warming hiatus was an artefact of inadequate data, and that once they were adjusted accordingly, no slowdown had in fact taken place.

Another huge problem in connection with global warming is rarely mentioned.

Just a few months before the G20 meeting in Hamburg, the Russian President Vladimir Putin virtually agreed with the climate sceptics at a conference in Archangel on Russia’s Arctic coast, saying that

Climate change doubters may not be so silly

Putin has also said on Russian television that cold and stormy weather in Russia and Europe proves that global warming is a myth, a reflection of the typical confusion on the part of many between climate and weather.

Methane is a very powerful greenhouse gas with some 20 to 25 times the potency of CO2.

The good news is that CO2 decomposes very quickly within a decade or so, but the bad news is that there are huge supplies of methane in the northern hemisphere.

Under the permafrost in the tundra belt stretching all across Russia, Scandinavia, Canada and Alaska are huge amounts of frozen methane. The West Siberian peat bogs alone contain billions of tonnes of methane, says Russian scientist Sergei Kirpotin, who first drew attention to this risk in 2005.

The Russian government, or more accurately President Putin, is both sceptical of global warming and simultaneously sees it as an opportunity to develop shipping routes and access the large amount of hydrocarbons in Russia’s far north and offshore in the Arctic.

But some 10 years ago, a German news programme showed a Russian geologist standing at the edge of a snow-covered crater. When he threw a match into the crater, it  immediately burst into flames from the melting methane.

Large swathes of Russia’s uninhabited northern latitudes have long since turned into vast lakes stretching for hundreds of kilometres as the permafrost has melted, leaving the region virtually impassable during the warmer seasons. The idea that hydrocarbons can be extracted in this environment where there are no solid surfaces looks like a pipe dream.

No wonder that in his 2006 book The Last Generation: How Nature Will Take Her Revenge for Climate Change, the environmental journalist in Fred Pearce’s entitled his chapter on the methane threat The Doomsday Device: A Lethal Secret Stirs in the Permafrost.

The scale is vast. As Pearce points out, the West Siberian peat bog covers a million square kilometres – an area the size of France and Germany combined.

And of course, animals produce large quantities of methane, so scientists recommend people to eat less meat – hardly likely in the West nor in the developing world as it acquires a taste for Western lifestyles.

Other options are to have fewer children – a fine solution since the West is dying out anyway – sell your car and avoid flights – options which people are hardly likely to take up if they infringe their personal freedom.

There is also much hype around China, with many people arguing that, faute de mieux, it has now become the global leader on climate change following America’s withdrawal from the Paris accords.

China, we are often told, has actually reduced it CO2 emissions as it has switched investment into renewable energy such as solar photo-voltaic panels and wind turbines, while the US is going in the opposite direction.

This simplified view is nonsensical. Yes, China has a policy of reducing coal use, but a major reason it has reduced CO2 emissions is simply because its economy has slowed from well over 10% per annum to about 6 to 7% per annum and therefore needs less energy than before as its manufacturing output falls.

This obviously has a beneficial effect in reducing CO2 emissions, but to ascribe any moral superiority to China on that basis is wholly misplaced.

Despite the reduction in CO2 emissions, there are still fears that Chinese omissions could continue increasing up to 2030. In any event, the government has said that it would only agree to further reductions if other countries made similar cuts.

India is the third biggest emitter of CO2. Its per capita and total CO2 output is much lower than that of the developed countries and China, but again if we accept the argument of historical and economic equity, Indian will be able to add yet more CO2 to the atmosphere – thus increasing yet further the parts per million and increasing potential global warming.